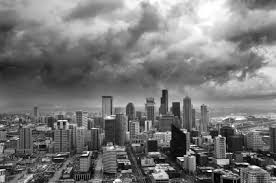 Novembers in Seattle are very dreamy.

The leaves have fallen down from the trees onto the streets and for the short period of time before the rains come, it’s a blast to take your 70’s CJ5 and drive through them just to see the multicolored leaves blow over the streets in your rear view mirror.  I actually know people that come to Seattle this time of year to enjoy the fall like colors but it only lasts a short period of time before the rain turns those same pretty leaves into “ice like” gobs of slipperiness that make the streets like ice.

You may be coming around a corner and if your not careful you will end up on the side where the leaves were but this time they will send you into a spin.

Its the mixture of leaves and rain that makes them so slippery and while its dangerous but for a few weeks before the rain came they are so much fun to drive through.

That’s the wisdom one must have when they are spreading the gospel in enemy territory.

You need to learn to enjoy life while you are in the midst of a desert place in your life.  Learn to drive through the leaves because sometimes the enemy will come and somehow take it away and again you will find yourself driving with caution again.

Sometimes I wish that I was not an evangelist, because then it would be easier for me to enjoy longer periods of grace and peace and not always be under the gun but since I choose to spread the gospel to the lost I am always feeling the pressure of

I have learned however that the bigger the levels, the bigger the devils and I confess to you now diary that once one begins to evangelise to the very people that God has chosen one may as well spray paint a huge white target on his or her back.  I swear this target begins to glow in direct proportion to how many souls one leads to Christ and now mine is glowing and I am under constant attack from the enemy even in my own church.

I have lost all but still the desire is in me to preach to the lost in Seattle and to be honest it’s by the grace of God and his son Jesus Christ that gives me the strength to continue when because every morning when I awake my body aches with pains that are indescribable but I push on no matter what the resistance is.

My family was running out of hilton points and we had to use them or loose them so I booked a trip over thanksgiving to Scotland.  On the way from Manchester to the Scottish Highlands my family was suffering from jetlag and fast asleep so I took the liberty of taking a long detour to a little known patch of land where Evan Roberts preached the gospel.

Roberts led over 100K to Christ and the revival was so strong that it jumped the ocean and came to LA with the Azusa street revival in 1905. Over half a million people were led to Christ through this revival and there is not ONE sign showing the place where he preached. When I reached the very place Robert’s preached it was a vast farmland. I looked out over the fields and imagined 100 years before people falling under the Holy Spirit and changing. Not even a sign. Nothing to show where he was.

Jezebel eventually killed this revival but the work that God did through this man was amazing.

I see revival coming to the Northwest.  I see it and I feel it.  It’s coming.

We have been going to tent city and handing out free pizza’s and praying for people but we have not been able to really hold a service but I know in time I will be able to preach to the lost because God loves them so much.

There is additional good news Diary.  Not only have we had a breakthrough with Tent City, but Thursday nights at Jesuslives.com have been going good. We had 52 people last Thursday eager to hear the word of God and the worship was so anointed the message was easy to deliver.  I did not even follow my preaching but was led by the Holy Spirit to teach on Forbearance, which is the final coat of armour the Christian can wear that really incompasses all of the fruits.

To walk through a trial with a smile is the final goal.

I pray for revival in the Northwest and I pray for two unspokens which plague my nights with worry. I know its a sin to worry, but I share my sins openly in hopes that others will know their sins are much like mine.

Your brother in Christ,